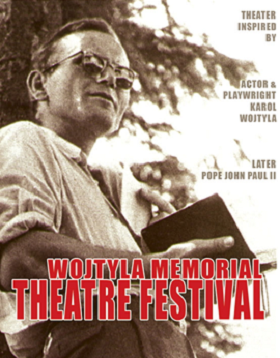 In his youth, Karol Wojtyla showed great interest in the theatre.  While a student at Jagiellonian University in Krakow, Poland, he joined an experimental theatre group known as Studio 38.  As World War II erupted and Poland was invaded, young Karol became a founder of a clandestine theatre group, The Rhapsodic Theatre.  This group, in defiance of the occupying Nazis, produced the plays of the Polish Romantics and worked to preserve both Polish culture and moral values.  In 1941, Karol Wajtyla would enter the seminary, also a clandestine operation, and begin his journey to becoming Pope John Paul II.