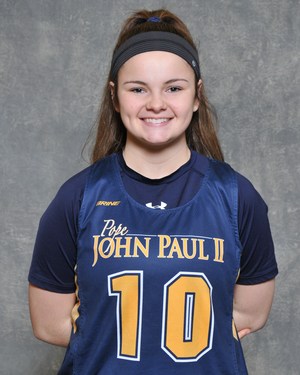 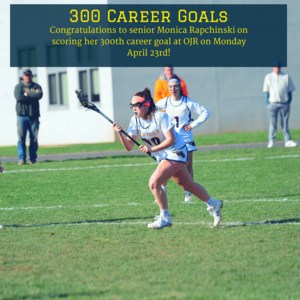 Senior Monica Rapchinski is currently PJP's record holder for career goals and 1 of 3 student-athletes in PIAA history to score over 300 goals in Girls Lacrosse.

Monica Rapchinski'18 scored her 300th goal of her career on Monday, April 23rd against Owen J. Roberts. In Monica’s four years at PJP, she has been at the top of her class. She currently has a 4.0 GPA while participating in three varsity sports: soccer, basketball and lacrosse.

From her freshman year, she has been a student athlete to watch. Monica will be attending Tufts University in the fall to play lacrosse with an intended major of Biopsychology. President Bozzone stated, "Monica is an exceptional example of what our student body represents. We are so very proud to have a student-athlete of her caliber to reach this unprecedented milestone.”

Monica has been an asset to the girls’ lacrosse team. The team currently holds a record of 8-4 for the season and leads the Frontier Division of the Pioneer Athletic Conference. Maureen Burger, girls’ lacrosse coach stated,“We are so lucky to have four incredible seniors this year that continue to break records. Monica Rapchinski just scored her 300th goal, which is simply amazing! Grace Cobaugh dominates the midfield and recently scored her 100th career goal. Julia Latoff keeps our team organized and acts as a ‘point guard’. Charlotte Williamson is the most experienced goalkeeper in the league with over 650 career saves.”

PJP is fortunate enough to have (24) twenty-four students including Monica that have already committed as student-athletes at the collegiate level.

The mission of Pope John Paul II High School is to provide a Christ-centered educational environment in the Roman Catholic tradition that promotes academic excellence, nurtures faith development and fosters leadership among its students.