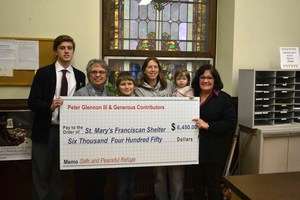 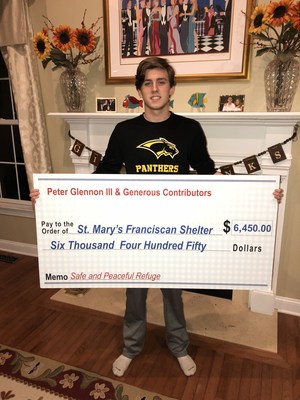 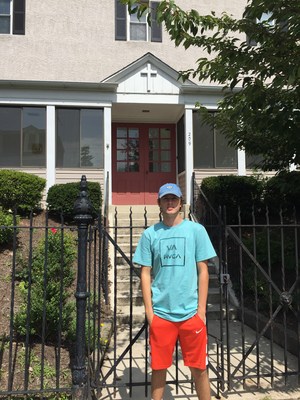 As we prepare for the Thanksgiving Holiday to be with our family and friends; we reflect upon the many blessings we encounter in our life. PJP is blessed to have many students that embrace and live our catholic values and mission through giving back to their communities in a variety of ways.

There are those impactful moments when PJP students, without hesitation, take it upon themselves to help others for the common good!  Peter Glennon'19 did just that!

As our Patron Saint Pope John Paul II said, “Let us remember the past with gratitude, live the present with enthusiasm, and look forward to the future with confidence”

Back in August, Peter Glennon’19, wanted to have an impact in his community.  Peter met with Sister Bernadette Dougherty (SSJ) who is the Executive Director of St. Mary’s Franciscan Shelter for Homeless Families located in Phoenixville, PA.  For over 30 years, the shelter has been providing temporary housing for families who are in a housing transition.  During Peter’s visit, Sister Bernadette shared some of the specific needs to improve the shelter.  Peter decided that he wanted to have an impact in the lives of those who needed it.  Peter would raise money to purchase much needed computers, desks and a state of the art security system that would have twenty four hour surveillance cameras, both within the shelter and around the property.

Peter donated half his earnings from his summer job as a lifeguard towards his lofty goal to help Sister Bernadette.  In addition, he reached out to family and friends as well as some businesses within the area.  Amazingly, Peter raised $6,450 to purchase the much needed items for the families at the Shelter.  In addition to the monetary donation a Dell All in One computer was delivered for use in the Family Day Room

We are proud of our Golden Panther, Peter Glennon, for demonstrating our Catholic Values and Mission!  PJP along with St. Mary's Franciscan Shelter for Homeless Families are thankful for Peter's kindness and support!

Like many students at PJP, Peter displays why it is important to make an Impact today, tomorrow and forever!

Pictured from L to R:
Peter, Sister Bernadette Dougherty, Executive Director, members of a family who reside at the Shelter and Kate Garges, Staff Member.