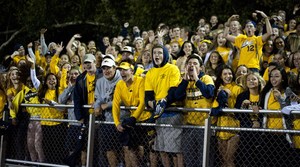 The last six weeks have whittled down more than 120 schools down to the Final Four. Now, a two-week voting period will determine who gets the coveted top spot as the No. 1 Student Section in Southeastern Pa.

During the "Elite Eight" round, Pa Prep Live's online poll had to re-start itself when PJP reached the 25,000 vote capacity! Had the winner come from that round, PJP would have won easily. WE MUST DO IT ONE MORE TIME.

Start Voting, PJP!  From every device, for the next two weeks!   Leave comments on PA PREP LIVE'S poll.  Be creative!   During these two weeks, "Panthers vs. Cancer" and Homecoming 2017 will take place, two of our largest student section events of the year.  It's OUR time to shine!