Concert at the Cathedral Basilica Sts. Peter and Paul - September 29 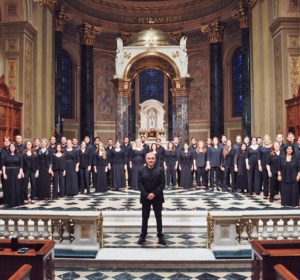 On Friday, September 29th, The Same Stream Choir, under the baton of artistic director James Jordan, will return to the Cathedral Basilica of Saints Peter and Paul for an 8 pm concert as a part of the annual Society for Catholic Liturgy conference. Open and free to the public, conductor James Jordan will guide the audience through some of his favorite selections from the choir's recent repertoire. Noted for his musical and philosophical insight, Jordan is considered to be one of America's foremost choral conductors, serving as Senior Conductor at Westminster Choir College in Princeton, NJ. The most published performer/author in the world, he has authored more than 30 books on all aspects of the choral art, and he has been described as a “visionary” by The Choral Journal. His book Evoking Sound was named as a “must read” on a list of six books by The Choral Journal. One of his university choirs, the Westminster Williamson Voices, was nominated for a GRAMMY award in 2013 in the "Best Choral Performance" category for their recording of James Whitbourn's "Annelies".

The Same Stream Choir has quickly made a name for itself as an exciting new professional choral ensemble. The Same Stream is committed to concert, community engagement, and recording projects which spread choral music to diverse audiences, and support the work of emerging and living composers from around the world. They have two upcoming album releases, including "Abide" and "Serenity: The Music of Paul Mealor". Find out more on their website at www.thesamestreamchoir.com