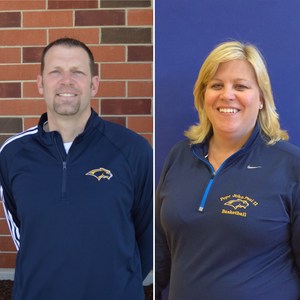 PJP is excited to welcome new head golf coach Brian Kovatch.  Coach Kovatch, a passionate golfer, has been coaching area youth for ten years, including soccer and basketball teams, while implementing a golf training program for youth in the Boyertown area.  Coach Kovatch has a reputation as a passionate, student focused, dynamic, and effective leader.  He has the ability to lead, motivate, and mentor individuals and teams to achieve high level goals.

Coach Kovatch has hit the ground running!  In his short time as the head coach, he has begun to implement some of his innovative ideas that will enhance the golf program.  One of the immediate changes Coach Kovatch made with President Jason Bozzone was to secure Gilbertsville Golf Club as PJP golf team's home course.   Gilbertsville, a short drive from PJP's campus, is a beautiful 27-hole course, and it is the course where all PAC and District playoff matches are held.

"The first step to making a positive impact is to determine what resources our student athletes need to become successful.  Playing at Gilbertsville for the season will effectively prepare our student athletes when they compete in playoffs," said President Bozzone, "This decision is a win-win for PJP, as this will intentionally demonstrate to our students how we are investing in the future of our golf program.  Coach plans to ensure our golfers are well-prepared both inside the classroom and on the green this year as we build upon our great success this past year.”

With the departure of Coach Liz Bernstein,who relocated to Florida, PJP has named Assistant Coach for the girls' basketball team, Stacey Huntington, as the Head Varsity Coach. Coach Huntington was former Coach Bernstein’s protégé, and she has helped to build PJP's accomplished basketball program.

"PJP was committed to identifying a leader who would uphold the success and reputation of the girls' basketball program, and we have done that with the promotion of Coach Huntington. I have no doubt she will continue to make our Panthers 'Golden', as we can see through the past two years the success she helped build.  Coach Huntington remains highly committed to continue the work that she, our former head coach, and assistants have set to accomplish at PJP.  I met with members of the girls' basketball team, and they expressed the importance of having consistency with their team to ensure growth and development to get us to the next level of winning Districts.” said President Bozzone.

Coach Huntington added, "I look forward to working with the staff and the students of PJP to further a tradition of excellence on the basketball court that mirrors the academic achievements our students and the impact of Pope John Paul II on our community."