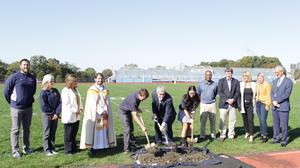 On Monday, October 10th, Pope John Paul II High School held a groundbreaking ceremony for the track replacement project. This project was made possible through the generous support of PJP friends, families, and donors who made a gift to the Lights On, Race On campaign.

The ceremony began with PJP President Vincent Cazzetta making some remarks. His remarks were followed by a blessing of the project by PJP Campus Minister Father Giardini. PJP Chair of the Board, Dr. Robert Getts and track athletes Jack Heffner and Nina Dudas, participated in the ceremonial shoveling of dirt. Others in attendance included PJP Track and Field Coach Lisa Cagliola, Athletic Director Tracey Rarich, and Principal Kathleen Guyger. Also on hand was Darren Anderson from ATT Sports who will install the new track along with PJP Board members Bill Breslawski, Terese Brittingham and Buz Bass.