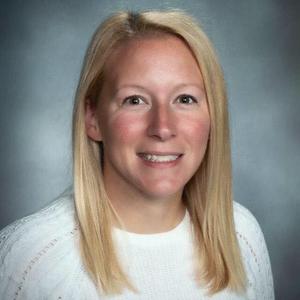 For the last seven years, Mrs. Rarich has been the Assistant Athletic Director as well as the Head Athletic Trainer at PJP.   As Athletic Trainer she has been responsible for the care of over 400 student athletes, annually.  In her role as Assistant Athletic Director she has helped the department create multiple policies including concussion, COVID, and heat acclimation. She was also instrumental in the creation of an athletic emergency action plan. Mrs. Rarich is also responsible for posting to the  PJP athletic social media accounts, non league game scheduling and equipment and uniform purchases.  She was also responsible for all communications with official assignors and game officials.

Mrs. Rarich earned a Master's Degree in Sport Management from California University of Pennsylvania as well as a Bachelor’s Degree in Athletic Training from West Chester University.

“I am thrilled to be selected for the position of Director of Athletics at PJP,” said Mrs. Rarich upon accepting the position.  “I look forward to providing leadership to an athletic department that features the finest coaches, faculty, staff, students and families.”  Mrs. Rarich will begin her new position immediately.

Pope John Paul II High School is a secondary school of the Archdiocese of Philadelphia and is accredited by the Middle States Association of Colleges and Schools.  More than $32 million in grants and scholarships for higher education were awarded to members of the PJP Class of 2022.Pope John Paul II is under the administrative leadership of Principal, Mrs. Kathleen Guyger Principal and President,  Mr. Vincent Cazzetta.